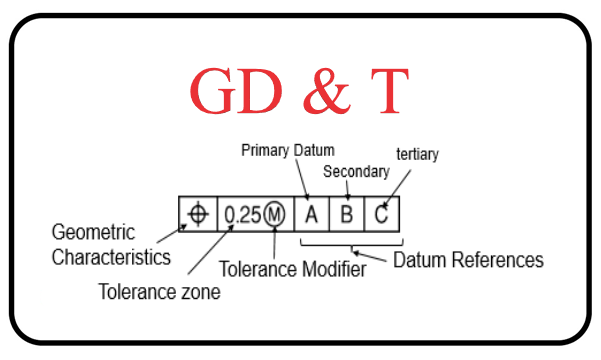 The Geometric Dimension and Tolerance (GD & T) is the set of standard which is used for defining the dimension and assembly feature of the product in engineering drawings, therefore it shows how the part / product functions. GD & T is use by the design engineers to show the function and requirements of the product, and what to be achieved from the manufacturing process itself. This tool is helps to every individuals to understand the design and drawings.

American Society for Mechanical Engineers {(ASME) Y14.5} – 1994 is the accepted geometric dimension and tolerances standard, which is followed by the designers to represent the product feature in engineering drawings. So it allow us to manufacture the product with accuracy and precision.

A numerical value used to describe the theoretically exact size, profile, orientation, or location of a feature or datum target. It is the basis from which permissible variations are established by tolerances on other dimensions, in notes, or in feature control frames.

A theoretically exact point, axis, or plane derived from the true geometric counterpart of a specified datum feature. A datum is the origin from which the location or geometric characteristics of features of a part are established from the datum.

A specific line, or area on a part used to establish a datum.

The condition in which a feature of size contains the maximum amount of material within the stated limits of size-for example, minimum hole diameter, maximum shaft diameter.

The condition in which a feature of size contains the least amount of material within the stated limits of size-for example, maximum hole diameter, minimum shaft diameter.

Regardless of Feature Size (RFS)

The term used to indicate that a geometric tolerance or datum reference applies at any increment of size of the feature within its size tolerance.

A two dimensional tolerance zone, defined by two parallel planes within which the entire surface must lie.

A condition where an element of a surface or an axis is a straight line.

A condition on a surface of revolution (cylinder, cone, sphere) where all points of the surface intersected by any plane perpendicular to a common axis (cylinder, cone) or passing through a common center (sphere) are equidistant from the axis of the center.

A condition on a surface of revolution in which all points of the surface are equidistant from a common axis.

The condition of a surface, axis, median plane, or line which is exactly at 90 degrees with respect to a datum plane or axis.

The distance between two parallel planes, inclined at a specified basic angle in which the surface, axis, or center plane of the feature must lie.

The condition of a surface or axis which is equidistant at all points from a datum of reference.

A zone within the center, axis, or center plane of a feature of size is permitted to vary from its true (theoretically exact) position. It is the total permitted variation of the feature, from its true position.

Profile of a Line

A uniform two dimensional zone limited by two parallel zone lines extending along the length of a feature. Profile of line is measure by using the gauge which is exact the true profile of same feature.

Profile of a Surface

A uniform three dimensional zone contained between two envelope surfaces separated by the tolerance zone across the entire length of a surface. It is the profile of surface and mostly measured by using the CMM,

A composite tolerance used to control the relationship of one or more features of a part to a datum axis during a full 360 degree rotation about the datum axis, so each circular element of the feature/part must be within the runout tolerance.

A composite tolerance used to control the relationship of one or more features of a part to a datum axis during a full 360 degree rotation about the datum axis. Now it is measure by fixing all datum and rotate the part with axis and measure the deviation of runout.

What is PPM? | way of measuring defects

What are the Significant (SC) and Critical characteristics(CC) in Manufacturing & Design Industry?

What is Impact of defect in process?